Let's Have a Hard Conversation...

Last night was the opening night for an exhibit entitled:1 in 3: Multidisciplinary Art Exhibition on Gender-Based Violence, Slut Shaming and Reproductive Rights. (Presented by Treeo in Phoenix) I attended the opening, not just as a viewer of art, but as one of about 20 woman who participated in the creation of said project. Having my picture taken for this project was hard for me, on multiple levels, the most basic being that I do not like having my picture taken, and the more complex being that I don't usually talk about the violence I have lived through. Seeing the photo part of the exhibit was moving, and I felt a sense of pride about it all. Seeing the video though, where were all talked about why we chose to participate put me into a slight amount of shock. Hearing a woman recite a poem about her own experience made me remember how it felt to have hands around my neck.

After my first experience with abuse, my mother threw me into counseling so I wouldn't have to burden her with my tales, instead I could talk through my issues with a revolving door of strangers. But whenever she met someone new, she would pour out her sad Woe Is Me story about how her life had been torn apart by events that, honestly, she was just collateral damage. Everyone she met, she told, and then they pitied her, and me, and my sisters. The standards for us became lower because we were all victims, and therefore couldn't amount to as much as the "normal people".

I got into one of the most dangerous relationships of my life my senior year of high school because I met a guy who had been through the ringer himself, and so he didn't treat me like a fragile flower. I loved how it seemed that he didn't treat me different than anyone else. Problem was that he didn't see me as weak per say, but he got inside of my brain and used my previous abuses to  manipulate me into thinking that the new types of abuse he subjected me to was actually what functional relationships looked like.

I hated it. I still hate it. I don't want people to look at what I achieve and say, good for you, most people like you couldn't do what you did. I don't want someone to love me in spite of my past, or even more because of it. The things I achieve in life should be congratulated because they're hard to achieve for ANYONE, I don't need the added label to make it an achievement.

Last night I was stripped raw to my core, and I was really glad that while I was at the exhibit I had two dear friends with me who both held my hand for most of the time we were inside. But then I had to go home and put my son to bed. And be alone. I sent a couple snapped photos I took from the exhibit to a couple people that are closer to me than most, and this portion of conversation sums up how I felt: 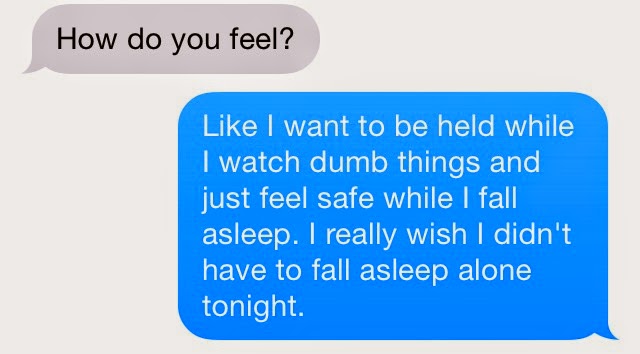 So today is a new day, and I'm less raw than I was last night, but I realized something. I keep trying to separate the different parts of me, like the person who went through the trauma is a different person than who is a mother, and that the person who runs a business is different than either of those. Like I try to make it so the parts of me that has feelings and emotions never touches the parts of me that are practical and sensible. That's not normal though, that I'm pretty sure is schizophrenia. And I'm not crazy. Neurotic? Absolutely. OCD? Always an ongoing battle. But I'm not crazy. I keep wanting to make a difference in the world, and I want to say something worth being heard, but I can't keep acting like Megan Who Was Abused is anyone other than just Megan. It's all a part of everything I do, not just on nights where I actively talk about it, but in how I relate to people, and how I make decisions. I am not a broken mirror where only parts of me are usable at a time. I'm a piece of stained glass, where all the different pieces come together to make a work of art.

To be completely honest, I still want someone to come over and hold me, and have that outside reassurance that the harm I've lived through is over and gone, and that all that's left is some scars that are still apparently healing, but I probably don't need it. (Or I'm lying to myself) I was on the phone last night with my ex who had a terrific day and wanted to share, and I was happy to hear about it, but there was no hiding the pain I was feeling. This morning when I dropped my son off before I came to work he mentioned that I had sounded like I was in a bad place. I was, but we both knew his presence wouldn't have made it better, it might have even made it worse.

So I'm a bit of a mess right now, but even writing this all out helped me feel a little more at peace, and maybe one day I'll be like some of the women last night able to laugh and enjoy themselves at events like that.

It’s done! The movers have long come and gone, and aside from 2 boxes and an old laundry hamper of /stuff/ I need to figure out what I’m do...

Megan Socks
Just a gal trying to make sense of the world we live in. I have a laundry list of diagnoses, but they're mostly in check. ;) I can pass for normal, but I decided a long time ago that was the boring option. I might not know where life is taking me, but it for sure will not be boring.